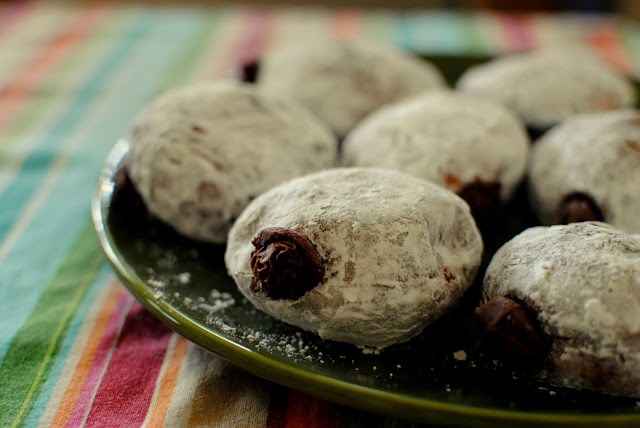 Well, since we don’t have a Krispy Kreme or Dunkin Donuts
closer than an hour away,
how else were we going to celebrate
National Donut Day?
(boo to not having free donuts)I did a search last night for homemade donuts
and found tons of recipes.
Most were way too much work.
I mean I like donuts and all
but I didn’t really want to put THAT much time into it.Finally a recipe for donuts using frozen bread dough.
I think to myself…
Self, there are 3 frozen loafs in the freezer.
Not sure how old they are,
but if they are just getting fried…
how bad can they be?

They actually turned out pretty good
and were even easy to do…but
I have a few tips for you if you want to
become a donut baker:-)

1. Use fresh frozen dough…
mine didn’t rise as nicely as could be.
(probably has something to do with how old it is)
2. Start earlier in the morning. The donuts need time to rise.
(i had to put mine in the warm oven to get it going faster)
3. Don’t heat your oil super hot.
I burned the first batch of donut holes.
4. Flatten out the donut holes a little bit.
They wouldn’t turn over
and that made them burn even more on that side.
5. Whip the frosting and maybe even add a little bit more liquid.
(i had leftover choc buttercream that I used, it was a little thick)
6. Make an extra batch, so that when the kids want to eat them right away,
you will still have a plate to take pictures with.
(my poor kids had to wait until I was
done with my 5 billion pictures that I take of food)

Now that you won’t make my mistakes…
on to the baking.

Thaw out a loaf of bread dough.
(I put mine in the fridge overnight.)
Roll out with some flour – 14″x6″
Use a glass cup to cut circles.
Roll up the leftover pieces for holes.
Let rise until double in size.
(if you are pressed for time, put in oven on lowest temp)
Heat up 2 inches of oil.
Do not over heat the oil…
you will burn the donuts.
Trust me!
Drop a few in the oil at a time.
Cook about 30 seconds and flip.
Drain after another 30 seconds.
Use a knife to cut a hole in the side.
Let the donuts cool completely.
Roll in powdered sugar.
Fill donut with frosting.
Eat the donut.
Lick powdered sugar off lips.

They were good…just not as good as
my ultimate fav donut at DD!!!!

(maybe next time I should make donut dough instead of using bread dough)
Now there’s an idea:-)