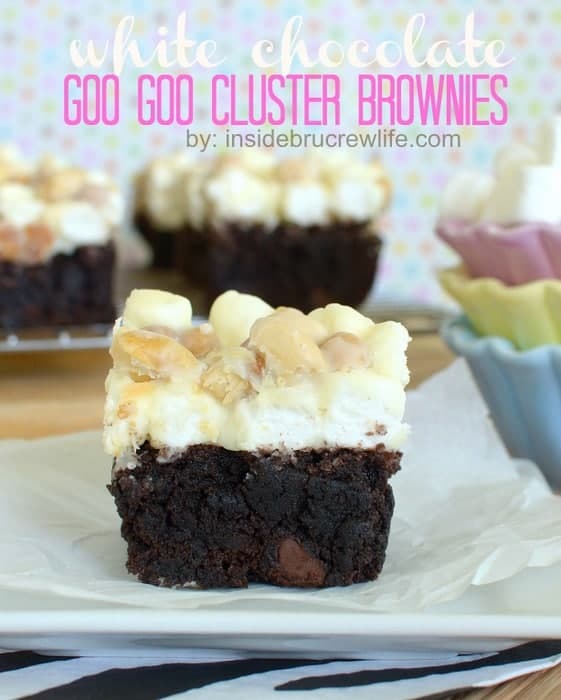 I have been trying to eat healthy this month.  Ok, ok, healthier at least.

Usually I buy the veggies, and then they sit in the fridge drawers for weeks until they mold and then I have to throw them away.

But for the last month we have actually eaten all the veggies we bought. Thank goodness for bowls of Italian Veggie Salad for dinner.

My sweet tooth has even died off to some degree...and that makes me kind of sad!

There have been a couple desserts that I have tried, and they were good, but I didn't want any more after a bite or two.

Shoot! I had 4 Reese's peanut butter eggs hidden away for a snack attack... and now I don't even want those. Who am I now???

At least it has been good for the hips and thighs! Sigh!

But then I made brownies for a dinner we went to. I have a serious brownie problem.

I just can't say no to them....especially these White Chocolate Goo Goo Cluster Brownies. They were my downfall yesterday.

Veggies? Who wants veggies when you can have chocolate goodness in melted form. Am I right?

Soft marshmallows, crunchy peanuts, chewy caramel all on a fudgy brownie... you can see why it was such a problem, right?

I ate spoonfuls of the topping. I even licked the bowl clean. Then I ate at least 3 of the brownies. (at least I think it was only 3)

I'm so glad I took all of them to the dinner...it could have been very dangerous today if any of these white chocolate goo goo cluster brownies had been left in my house. 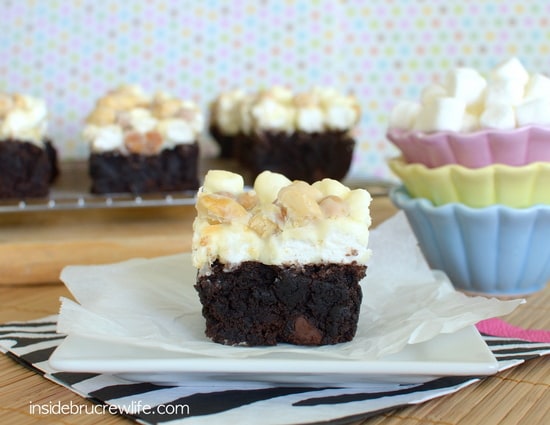 Stop drooling on your keyboard and go make your own pan of White Chocolate Goo Goo Cluster Brownies...you know you want to live on the dangerous side!