Easy, no yeast cinnamon rolls topped with chocolate is a delicious way to start out the morning.  These Chocolate Chip Cinnamon Rolls have been kid approved in our house.  Give them a try and see what your family thinks.

A Dark Chocolate Latte and these cinnamon rolls would be the perfect breakfast combo for the chocolate lover in your life. 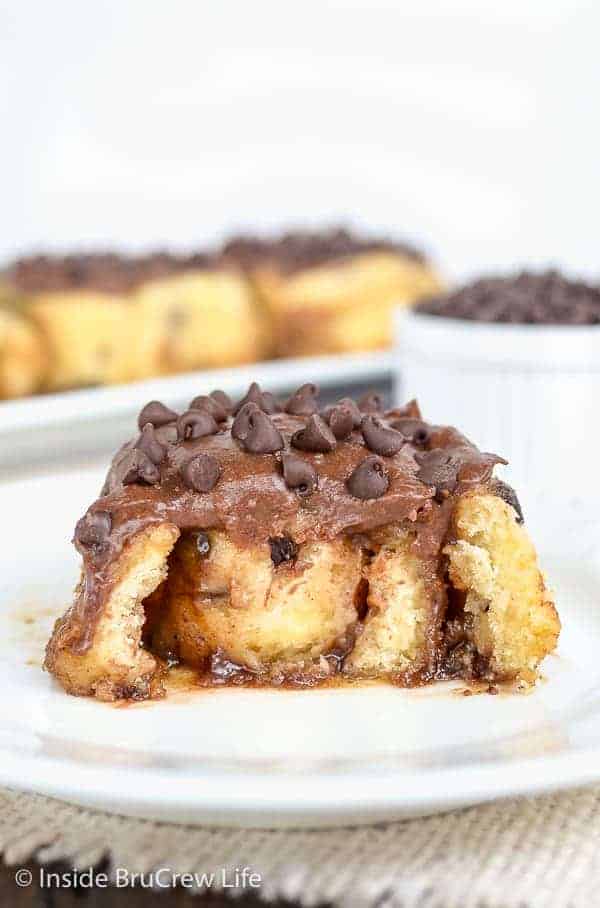 These homemade cinnamon rolls without yeast are a quick and easy breakfast that we like to make every once in a while around here.

You can seriously have these breakfast rolls made, baked, and eaten in under an hour.  Give or take a few minutes depending on how quickly you are moving.  Just don't move too quickly and forget a step or an ingredient.  Been there, done that, and been mad at myself for rushing.

Learn from my mistakes because no one will appreciate homemade cinnamon rolls that do not have all the buttery goodness they deserve. 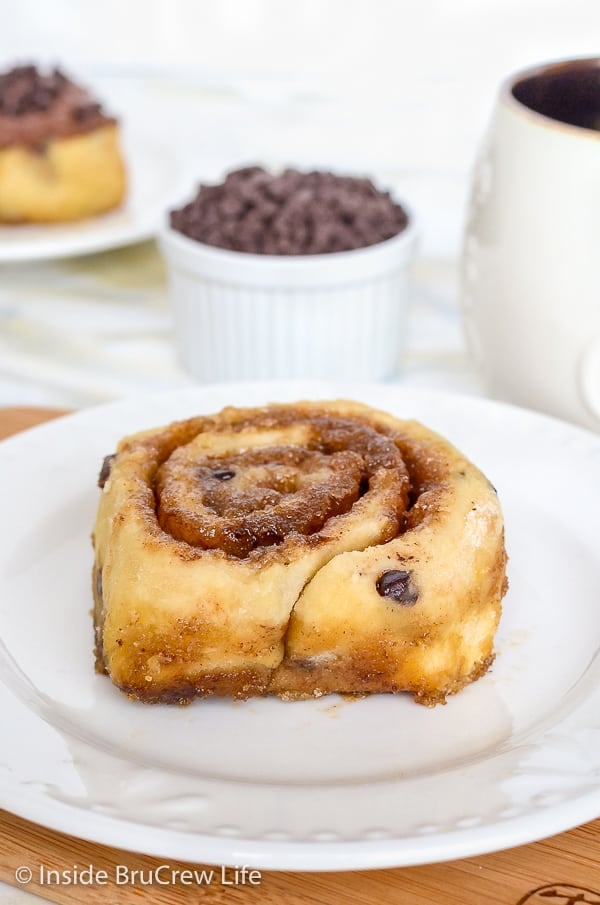 Can I tell you something? I have a fear of working with yeast.  The funny thing is that I have made this Homemade Pizza Dough and that uses yeast!!  The pizza turned out perfectly fine too.

So, I don't know why I shy away from making cinnamon rolls with yeast. My guess is that I have been making these no yeast cinnamon rolls for years, and I am not a big fan of change.  Why mess with a good thing?

Well, other than to change out the flavor combo every once in a while.  This is me we are talking about.  Making the same thing twice is not something I do very often. 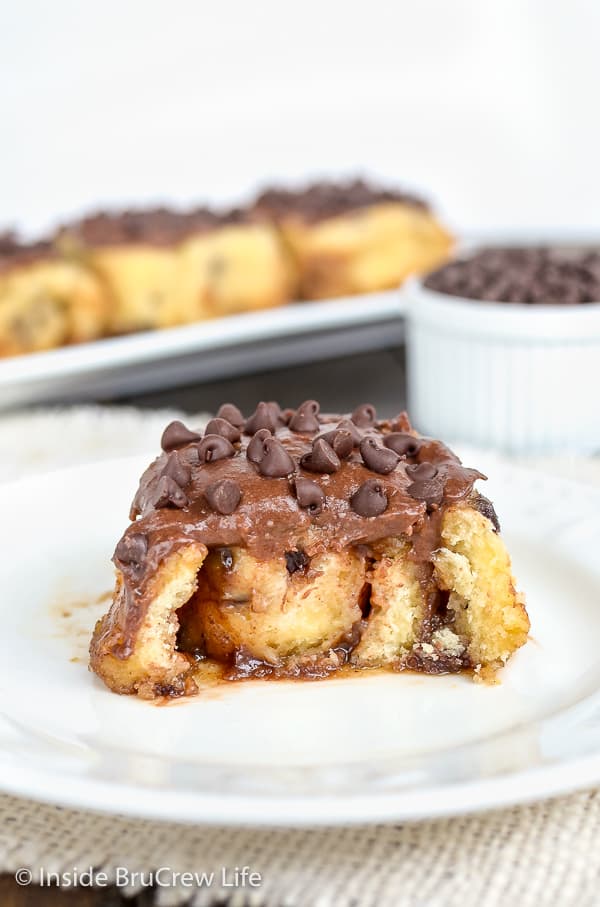 The dough for these quick cinnamon rolls is very simple to make.  All you need is a bowl and a fork.  Gotta love not dirtying a whole sink full of dishes, right?

Stir together the dry ingredients in a bowl.  Pour in the milk and melted butter and mix until it forms a soft dough.  Gently added the mini chocolate chips to the dough.

Knead the dough a few times with some flour on the counter, and then press it out with your fingers to form a rectangle that is 10 inches by 14 inches.  Make sure you have a light layer of flour under the dough as you work, so it doesn't stick to the countertop.

Spread melted butter and a whole lot of sugar and cinnamon in the center.  Roll it up and cut into 9 even slices.  I usually cut a small piece from each end to even it up first, but that isn't necessary.

Place the rolls in a buttered pan, drizzle with more butter, and bake for 18 minutes.  That is just long enough to make the chocolate frosting, clean the counter and floors, and do the dishes.  Before you know it, the easy cinnamon rolls are done and ready to eat.

Let the cinnamon rolls rest in the pan for a few minutes.  Warm rolls are delicious, but hot rolls that burn your tastebuds off aren't desired.  Trust me on this one.

After a few minutes, remove them from the pan, slather on some chocolate frosting, and go to town on a sweet, delicious cinnamon roll.  Oh, and don't forget the extra chocolate chips on top.  The more chocolate, the better! 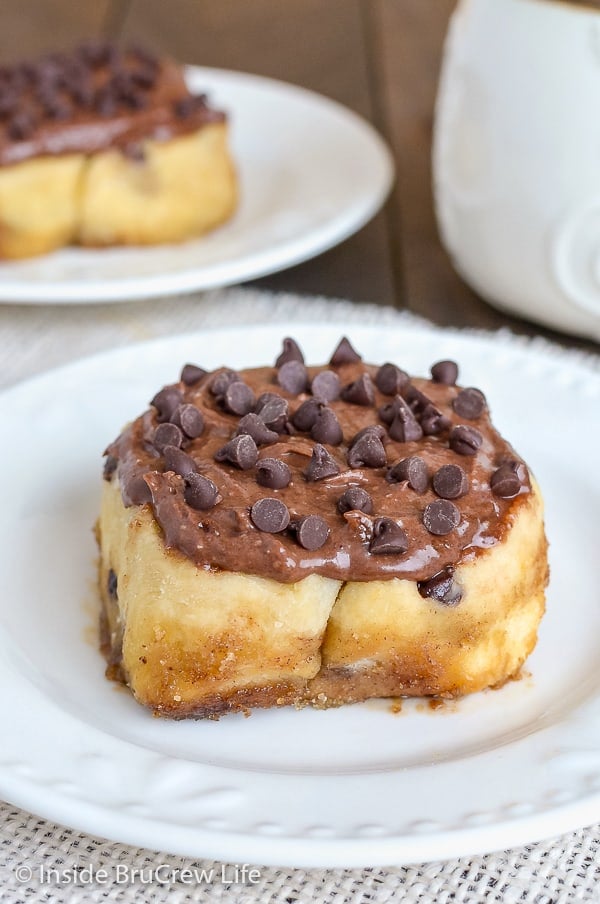 Add a loaf of this Cherry Chocolate Chip Banana Bread to your baking plans. This easy banana bread is loaded with chocolate and cherries.

Strawberry Chocolate Cinnamon Roll Bake adds the sweet taste of spring to cinnamon rolls. And don’t forget about that chocolate.

Mornings that start with homemade cinnamon rolls are the best. No yeast Chocolate Cinnamon Rolls with frosting are even better than the best.

These easy Nutella Pop Tarts are a fun breakfast treat.  Using a few ingredients gives you a homemade treat that looks just like the store bought version.

Chocolate Zucchini Cheesecake Muffins and a cup of milk is the perfect way to start out the day. Chocolate and cheesecake always gets my vote. 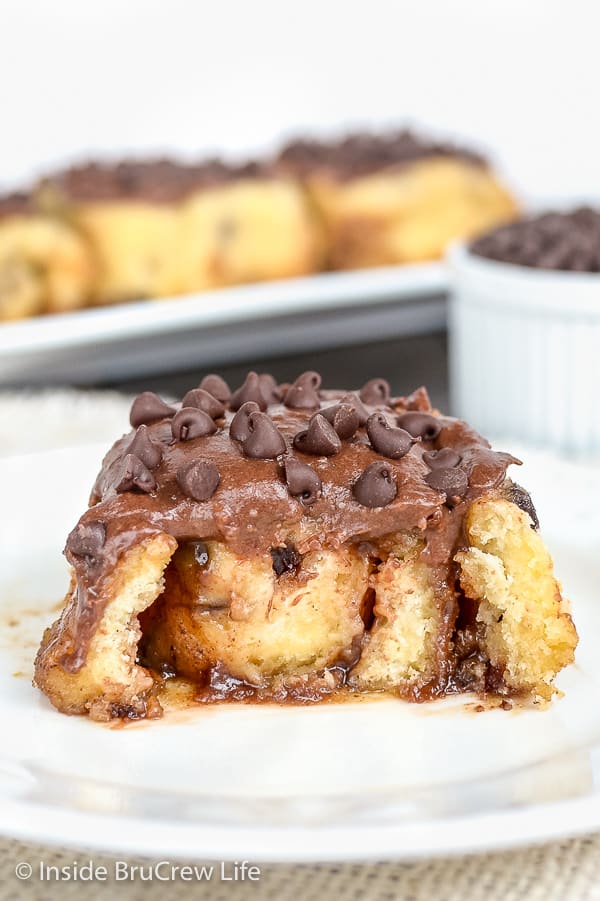 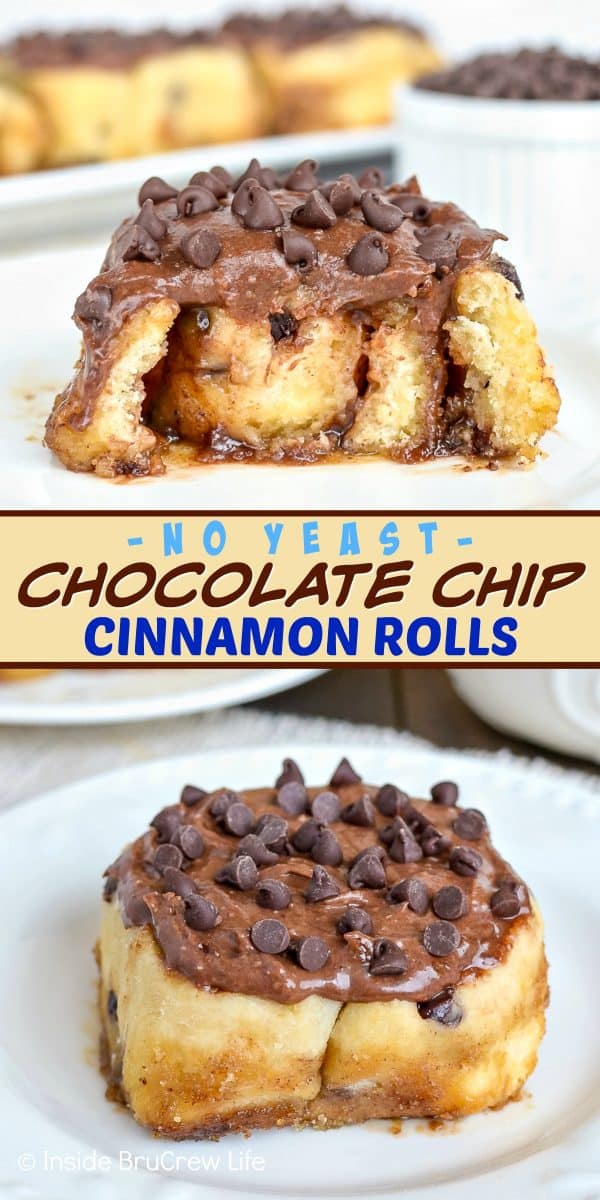