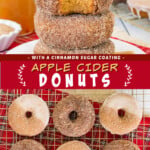 These baked Apple Cider Donuts are cakey, flavorful, and coated in a delicious butter and cinnamon sugar coating. This is such an amazing apple donut recipe to make this fall for breakfast. Just be careful or you might eat the entire batch.

One of my favorite things about fall is picking apples to bake an apple cake and eating a few cider donuts. There is just something about those donuts that I can't resist.

I knew that I had to find a way to replicate those amazing farm donuts, so we could have them any time of year.

Why This Recipe Works

The flavor and texture of these baked apple cider donuts is what makes them so good.  They are dense, moist, and have a really good crumb texture.

A coating of butter and cinnamon sugar takes them over the top and makes them taste just like the ones from a bakery or apple orchard. You will love how they are crunchy on the outside and soft on the inside.

In less than an hour, you can have a batch of homemade apple cider donuts sitting in your kitchen waiting to be devoured.

Use a few simple ingredients from your pantry and the grocery store to make this easy apple cider donut recipe.

Regular apple cider is best for drinking cold or warm, but it will not add much flavor if you bake with it. There is a trick to getting a good apple cider flavor in baked goods.

The flavor comes from concentrated apple cider. Simmering apple cider over low heat until it is reduced down and thick gives it a stronger flavor that stands out when you bake with it.

Reducing apple cider intensifies the flavors in the cider. Taking the time to do this step will give your baked goods so much extra flavor.

Make sure to let it cool before adding it to your batter. I like to do this step the night before, so it is ready to go the next day.

How to make Apple Cider Donuts

These baked apple cider donuts come together in minutes. Just leave yourself enough time to dip and coat each donut. You are going to love the crunch and flavor that it gives these donuts.

Bake and Cool the Donuts

BruCrew Tip: You can also dip the cooled donuts in a glaze and sprinkle the granulated sugar coating on top, if you like. We tried it both ways, but I have to admit the donuts dipped in butter are way better!

These donuts really are best on the day that they are made. You can keep leftover apple cider donuts in a tightly sealed container. They will keep for 2-3 days on the counter. Pop one in the microwave for a few seconds before eating.

You can also freeze the donuts by placing them in a freezer safe bag with parchment paper between each donut. Freeze for 1-2 months. Remove from the bag and thaw on the counter for at least 30 minutes before serving.

What is apple cider?

Apple cider is the raw and unsweetened juice from apples. It is not filtered or processed, so there may be pulp in the juice.

Can I use apple juice for these donuts?

You can use apple juice, but your donuts will not have a very strong apple flavor. Apple cider really does give the best flavor.

Why are apple cider donuts so special?

Adding fresh apple cider that has been reduced down to a concentrated form gives these donuts a delicious flavor that tastes so good.

Please leave a 5 star ⭐️ rating and/or a review in the comments section further below.

*The post for Apple Cider Donuts was first published October 15, 2010. The pictures were updated November 2020, and the post was republished September 2022.