This Pecan Cheesecake Pie is the mashup you need in your life. The pecan pie you remember growing up with matches perfectly with the cheesecake you love. Once you make it, pecan cheesecake will ALWAYS be at the top of your "go to" recipe list.

Do you like cheesecake?  What about pecan pie? If so, I have a pecan pie cheesecake recipe that you need to make ASAP!!!

A few years ago I asked on Facebook what kind of pies people eat for the holidays. I thought for sure an apple pie or pumpkin pie would win the battle.  The response was pretty split between those two pies.

But it also turns out that a lot of people actually prefer pecan pie. I don't know why that surprised me because I happen to love a rich gooey pecan pie too.

Since I had actually never made one, it went on our to do list for the week.  But I didn't want to make a classic pecan pie, so we came up with a fun BruCrew twist for it.

Since we love adding cheesecake to the desserts we make, so we added a creamy vanilla cheesecake layer to the easy pecan pie recipe. Turns out that a pecan pie cheesecake was our best idea of the week!

This pecan cheesecake pie is a delicious recipe that you will enjoy making all year long.

This cheesecake pie is easy to put together with just a few ingredients for each layer. Measure everything for each part of the recipe first to save time when putting the pecan pie cheesecake together.

For the Pie Crust

For the Pecan Pie Filling

How to make a Pecan Cheesecake Pie

Pecan pie and cheesecake were meant to be together.  Follow the steps for each layer and the cheesecake pecan pie will come together easily.

The cheesecake layer magically floats up through the gooey caramel pecan pie layer as it bakes in the oven. 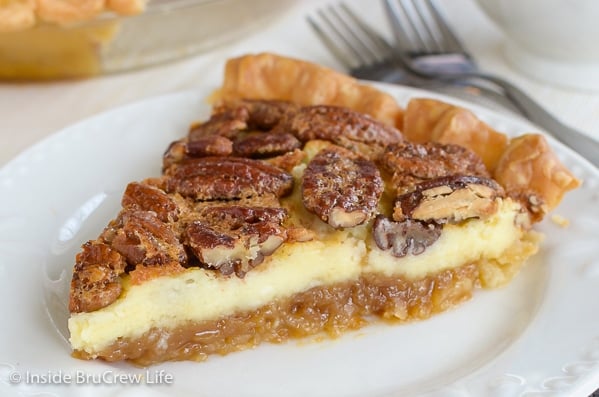 How do you keep the pie crust from sticking to the pie plate?

Sprinkle both sides of the pie crust with a little bit of flour to keep the crust from sticking to the bottom of the plate later.

How do you keep pecan pie filling from leaking out of the crust?

Brush the bottom of the pie crust with a little bit of a beaten egg white.  Chill the crust for 15 minutes before spreading the cheesecake filling in it.

Does this pecan pie cheesecake need to be refrigerated?

Can this cheesecake pie be made ahead of time?

Yes, it is a great dessert to make 1-2 days ahead of time because it needs time to chill before serving.

Please leave a 5 star ⭐️ rating and/or a review in the comments section further below.

For the Pecan Layer